We've been together for almost a quarter of a century. That's kind of a big deal. We loving singing together, have performed at countless concerts, parties, churches, homes, and outdoor venues. Scroll down and learn a little more about who we are.

Voice Male is comprised of 6 unique individuals who somehow found each other over 18 years ago. John Luthy came up with the Voice Male concept while singing with some of the guys in the Logan LDS Institute Choir. Initially it took nine of them to cover all the parts, but a couple of years later they decided they no longer needed the nose flute player, the cowbell ringer, and the guy who claps, so they trimmed themselves down to just 6. Actually, some members had to move on and be grown-ups, so they decided to give it a go with just 6. 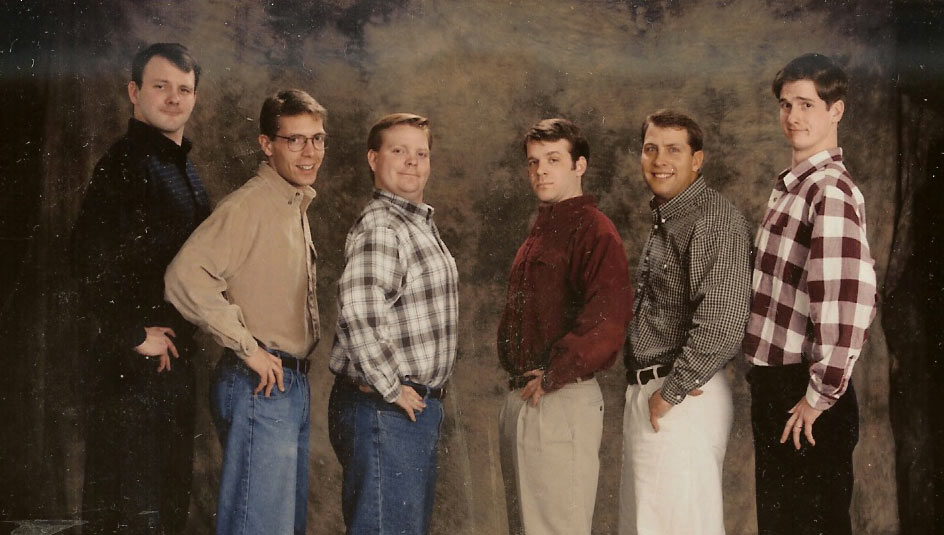 Over the years, they have had some pretty cool opportunities to sing in exotic locations (San Pete County) and for some pretty great people (their moms). Considering this is not their day job, they are lucky to pull together and accomplish anything at this point. They all graduated into careers ranging from Computer Networking (Nerd) to Real Estate to Law. When they are not working or singing, they are enjoying time with their supportive wives and children. The latest tally: 23 children who like to call each other Voice Male Cousins. As families grow, hair thins, and hips break, they hope to keep chuggin' along. As long as you'll keep listening, they'll keep singing.

Richard spends his time singing in the rafters. He sings the high tenor part and supplies audiences with a surprisingly endearing sense of humor. Richard, his wife Jenny, and their 4 children live in Lehi, Utah, where Richard is a commercial real estate agent. He is also key in making sure the business of Voice Male is running smoothly. Richard has a musical background in singing to his sheep on the ranch. He has since forgotten the lyrics. Where's Richard? Right where he should be.

Mike has a beautiful wife and five children. He lives in South Jordan, Utah. Mike graduated with an MBA and currently works for American Express Travel in Marketing. He began singing in Choirs in the 7th grade where he learned to sing very high. Later on he achieved the highly coveted role of President of the High School Madrigals until he was impeached. He sings primarily tenor, but can be found making other percussive and animal noises to help enrich listeners' experience. He has also taken on the role of writing, arranging, and producing much of what Voice Male records.

John provides the group's vocal percussion and sometimes sings bass. He is the bringer of normalcy when it comes to keeping the rest of the unbridled on-stage group in check. As the founding member of Voice Male, he has often taken on similar leadership roles. John graduated from the Law School at BYU and is working for Peck Hadfield Baxter & Moore Attorneys. John, his wife, and their two children live in Logan, Utah. John cannot claim to have had any background in percussing with his mouth. That's not something you learn. It's a gift. His wife echoes that point as he percusses sweet nothings in her ear.

Mike W. rounds out the Voice Male sound with his rich, carpet-like bass sound. He has also been known to throw out some subtly funny banter on stage. Mike, his wife, and 5 children live in Idaho Falls Idaho. Mike graduated with a degree in Computer Science and currently works for the advanced team at Juniper Networks doing networky stuff that no one in the group but Mike understands. Mike has a musical background blowing horns (trumpet) all through High School and College. Most notably and unrelated, he has played a game of one-on-one basketball with Shawn Bradley. He did not win.

Rick Murdock—still the new guy after six years—brings a lot to the group, including his first name (Richard) which completes the set. For his day job, Rick is the Leadership Trainer at The Utah Department of Transportation. He also teaches as adjunct faculty at the BYU Marriott School of Business. Rick lives in the Salt Lake Valley with his wife Liz and exactly five children. He graduated with degrees in music (BA) and public administration (MPA) from BYU, and an MS in Instructional Technology from USU. His musical background includes sneezing at the worst possible time while performing in a choral concert.

John had a remarkably versatile voice that provided much of the bonus material in shows. He had a marginal ability to mimic things like animals and accents and animals with accents. He also sang barely tenor (meaning he's a baritone who usually sings tenor--barely). John is survived by his wife and four children who live in quiet Honeyville, Utah, along with their 3-8 goats, 12 chickens, 4 rabbits, 2 cats, and a wheat field. This provided more inspiration to John in expanding his animal-sound repertoire. John received an MBA from BYU and worked as a Product Manager helping to get new family history software invented. John's musical background included playing the cello in 4th/5th grade, a year or so of piano lessons, a couple years in a drum and bugle corps, and lots of trumpet playing. He's a Virgo.

Phil was  a member of Voice Male for 14 years. On Thursday, February 11, 2010 Phillip Andrew Kesler passed peacefully from this life into the next. His wife, Heidi, and daughter, Eden were home with him at the time of his passing. He had fought metastatic colorectal cancer for the past three years. During that time, he continued to serve his church and to teach graphic design at Jacksonville State University. He held degrees (BA, MFA) in art from Utah State University and has been an Assistant Professor at JSU since fall 2005. He loved design, typography, and especially his students and colleagues.
‍
Phil was born in Midvale, UT on July 23, 1968. He served a two-year mission for the Church of Jesus Christ of Latter-day Saints in Taiwan. In addition to his wife and daughter, Phil is survived by his parents Claudia and Orson Kesler of Alpine, UT; and brothers: Matt (Tauna) of Liberty, MO; Dan of Taylorsville, UT; Ken of Thousand Oaks, CA; Aaron of Alpine, UT; and Steve (Morgann) of Salt Lake City, UT.